The Boys of Summer – Don Henley

“The Boys of Summer” by Don Henley, an acoustic cover by Mike Massé

My acoustic cover of “The Boys of Summer” is now available on YouTube and iTunes. I thought I’d share a little bit of its history, and a little bit of why and how I chose to cover this great song.

There are a few songs that instantly take you back to a certain time and place. This is one of those songs for me. It is somehow both dated and timeless. This song endures, due to its great melody, lyric and vocal. And that relentless synth riff that drives the song.

Mike Campbell– Tom Petty’s lead Heartbreaker, collaborator, and longtime writing partner had a version of the melody and rhythm that he offered to Tom Petty. Tom was working through Southern Accents which a sprawling ode to all things Southern. A synth driven song wasn’t part of the plans. So Mike Campbell called Don Henley. Because of course he did. “Don’t look back, you can never look back.” Apologies, Don, but we’re going to look back anyway!

Why I Picked This Song

Some of my fans may remember that I had my own March Madness tournament in March, 2014, to determine my next YouTube acoustic cover. My Facebook followers voted for their favorite song in each round until the winner was crowned. 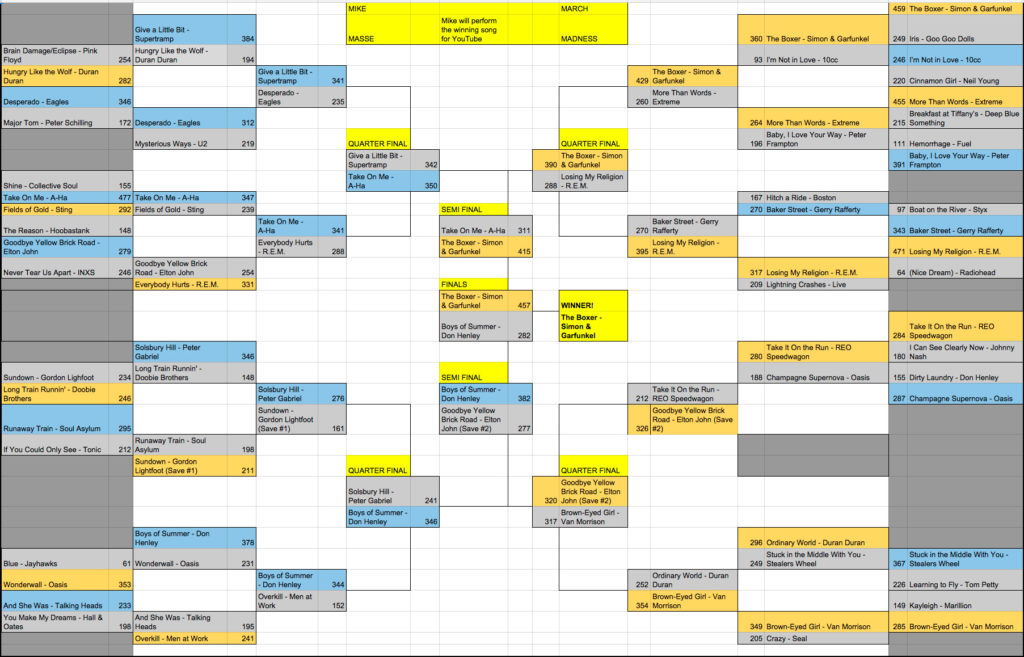 “The Boys of Summer” was runner up. At the time, I confess I was a little glad it didn’t win (although I love the song!), because I hadn’t sorted out what an acoustic arrangement would sound like yet. There’s that repeating descending synth riff that needs to be accounted for somehow. My initial thought was to loop it, but I’d never played to loops and I wasn’t sure I wanted to go down that road. So I tabled it, watched a couple other cover versions, looking for a little inspiration. I didn’t really see anyone else’s approach that captured the rhythm and movement of the song as I wanted to, so I just started hashing it out.

How I Play It

The original song is in Eb minor (or in the relative major, Gb), so I tuned down a 1/2 step (as one does) so I could properly play those opening chords, which end up being Ebm Cb Db, when tuned down (played as the usual Em C D, with a little bit of suspension/embellishment here and there). The chorus then became G D C. I wanted the arrangement to “go” somewhere, so I didn’t throw the synth riff into the first verse, but played fuller, more traditional chords. I saved the riff emulation for the second and third verses. I learned the little muted riff during the break after the second chorus, and that was pretty much it. Oh, and I decided to trim some of the instrumental, since I wasn’t trying to tackle the solos (you know me!) while playing the rhythm stuff.

I debuted the song live at a private birthday party near San Antonio, TX. The guest of honor was turning 40, so she was old enough to remember the song, but didn’t recognize it by name. She said, “What are you playing next?” I said, “The Boys of Summer”. She sort of politely smiled/shrugged and walked away, clearly not recognizing the song name. But as soon as the first verse kicked in, she and all of her girlfriends sang along the entire song. It was such a memorable first performance for me—such a huge validation that I’d captured the essence of the song, having people sing along like they were cranking up the original version 30 years earlier. I didn’t play it for awhile after that for some reason. After reviving it, it took time to feel comfortable enough with it to try to record it for YouTube—I trimmed it down a little, sped it up a little (sort of unconsciously, but I think the quicker tempo makes the instrumental parts (sans solos) not feel quite so long), and eventually performed it well enough to post online. I don’t know if I’ll ever match the energy (anxiety!) of that first performance, but having the audience sing along certainly wouldn’t hurt.

Mike Campbell on recording the song: (via Songfacts)

“I showed it to Tom, but the record we were working on, “Southern Accents”, it didn’t sound like anything that would fit into the album. Jimmy Iovine called me up one day and said he’d spoken with Don, who I hadn’t met yet, and said he was looking for songs. He gave me his number and i called him up and played it for him. He said he put it on in his car and had written some words and wanted to record it. That’s how it started.”

This song was a huge hit in the 1985 VMAs on MTV. The song won Video of the Year, Best Director, Best Art Direction and Best Cinematography. The original video featured filmmaking techniques that aren’t always in use today.